The original Ford plant administration building, located near CACU, has been partially renovated.

DETROIT — For the $13 million Communicating Arts Credit Union, the Inclusiv’ 40th annual conference brought moments of both triumph and struggle.

As the CEO of the conference's host credit union, Hank Hubbard invited executives from dozens of other CDCUs to witness CACU's impact in 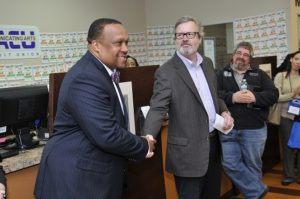 one of America's most blighted cities.

As a Detroit-area resident and supporter, however, he also showed his guests the depths to which much of the Motor City has fallen.

“You can see here that even on nicer blocks, you will have one or two or even three houses that need some work or may even be abandoned,” Hubbard said as he narrated the May 13 visit to credit union's branch in Detroit's Highland Park neighborhood.

Hubbard, who was CEO in 2010 when CACU won CU Times' Trailblazer Award for Outstanding Service to the Underserved, provided commentary during the trip to the branch, pointing to streets where it appeared entire blocks had been abandoned.

“Communicating Arts is the only depository financial institution left in the city of Highland Park,” Hubbard said. Opening a branch in the severely economically depressed area had been part of the credit union's growing awareness of its mission as a community development financial institution, Hubbard explained, but it still represented an enormous challenge.

For example, providing security for the credit union branch while at the same time not appearing to fear its own members. Part of the solution was to locate the branch in a new, outdoor mall area where the parking lot was surrounded by a short, decorative fence. The metal fence enhances the site's appearance but also made it harder for thieves to pull smash-and-grab robberies on parked cars.

The branch also installed a security vestibule to slow entry and scan for concealed weapons. Once inside, however, Hubbard pointed out the branch had maintained an open, welcoming feel. Tellers conducted business with members without heavy security panels in the way, and loan officers sat in small offices with doors closed only for privacy when needed.

The visit also allowed Hubbard to showcase the impact the credit union has had in the area.

DeAndre Windom, a local entrepreneur and mayor of the small community, praised CACU for seeing beneath the surface blight and into the lives of the residents. Windom is pictured at far left, along with Hubbard at center and CACU Chairman Matthew Barbour at right.

Windom in particular highlighted Highland Park as a key location in American industrial history, the place where Henry Ford built a manufacturing plant with the first assembly line and began paying his workers the then unheard of wage of $5 per day to allow them buy the cars they were making.

About two-thirds of that original Ford plant still stands in Highland Park and has been recognized as an historic site, with the plant's former administration building having been at least partially renovated. But the city is still looking for supporters who can help it finish the renovation and better exploit the brand, “the Home of the Model T.”

Meanwhile, Highland Park struggles along with Detroit as the big city works to emerge from its much publicized bankruptcy. Hubbard's own credit also has its financial challenges.

According to NCUA data, CACU ended 2013 with just over $1 million in negative earnings, a number which was almost exactly the same as its provision for loan losses in 2013.

“With collections, the problem has generally been pretty high turnover,” Hubbard said, recounting how CACU had often been hiring collections specialists from other credit unions, often with larger asset sizes. “We bring in someone new and they get frustrated and come back to us and often their recommendation is something like, ‘Don't loan money to so many lower-income people.’ But that's the very thing we were founded to do,” he emphasized.

Still, he said the board recognized that lending to lower-income people is not the same as high-risk lending and he said his board was prepared to adopt a different approach to underwriting that would allow it to make loans in a more sustainable way.

However, the credit union was also more expensive to operate than its peers last year, with a net operating expense ratio of 8.20% versus 2.94% for its peers. Hubbard said that's in part due to having 40 full-tine positions, which was a a result, he said, of the membership's preference for face-to-face service.

But Hubbard also said the credit union had needed a bit of a breather after four years of rapid growth in the wake of grants from the U.S. Treasury's Community Development Financial Institutions Fund and a changeover in its core processing system.

“I think everybody just got a little tired,” Hubbard said. “And we lost some of our focus. But I expect we will see a significant improvement in 2014.”