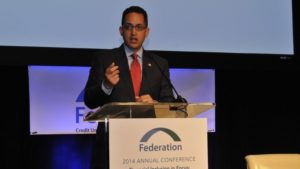 Don Graves, executive director of the President's Council on Jobs and Competitiveness, and the Obama administration's emissary to Detroit during the city's bankruptcy, addressed the conference's opening session.

DETROIT – The Inclusiv opened its 40th anniversary annual meeting Wednesday in a city with hundreds of thousands of residents in need of credit union services.

CEO Cathie Mahon welcomed the group with the observation that a significant number of executives in the room had been present when the organization was founded 40 years ago, and they could not have expected it would grow to represent about 200 member credit unions with roughly 3 million members in 46 states.

Don Graves, executive director of the President's Council on Jobs and Competitiveness, and the Obama administration's emissary to Detroit during this city's bankruptcy, addressed the conference's opening session. He spoke about Detroit and what both the local and federal government hoped to accomplish by working with the city through its bankruptcy.

“One reason I was excited when the president asked me to serve in this capacity with the city of Detroit is because what is happening here is happening in many other places as well,” Graves told his audience of about 300 credit union executives.

He outlined some of the infrastructure and economic challenges Detroit and other cities face.

As of this spring, he said, Detroit counted 70,000 vacant or abandoned buildings, 60,000 streetlights that did not work and saw its average response time from first responders hit 58 minutes.

“That translates into parents leaving and coming home to and from work in the dark,” he noted. “It means children doing the same to and from school, only past abandoned and burned out hulks of buildings on largely vacant streets. These are the communities that badly need financial institutions that can see past the reality of the day to day circumstance have a vision of what the future can hold.”

The Obama administration wants to convey its willingness to support credit unions in their efforts in Detroit and around the nation, Graves said.

“In 10 years’ time we want Detroit to be at the forefront of a movement through which struggling American communities are able to transform themselves,” Graves said. “We want credit unions, local and federal government to be part of making that happen,” he added.