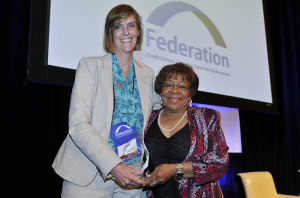 Rita L. Haynes is the CEO Emeritus of the Faith Community United Credit Union, Cleveland, OH recognized for serving over fifty years as its director, manager, treasurer and CEO.

Rita was recruited as Secretary of the Board of Directors of the credit union in 1958.  The credit union was facing tough times with the Division of Regulations.  She recruited her husband and other friends and together they turned the credit union around.  Under Haynes’ leadership the credit union moved to its current location and grew to over two million in assets with the help of Working for Empowerment Through Community Organizing (WECO).  Key Bank, formerly Society National Bank, donated the building and a joint grant from Eli Lilly Foundation provided salary compensation for staff. She led Faith to become and SBA approved business lender, and in partnering with Fannie Mae and HUD.

Rita was elected to the board of the Inclusiv (NYC) in 1992, serving as its Faith Based CU committee chairperson until 2001 when she was elected Chairperson of the Board of Directors.  She served in this capacity until 2006 and remained on the board until 2008 when term limits were implemented.

She was instrumental in helping establish the Americorp VISTA program in 1992, a federal service program aimed at alleviating poverty and strengthening low income communities and include the IDA (Individual Development Account) program focusing on financial education and saving.

Inclusiv led the fight for a CDFI Fund, which was established under President Bill Clinton in 1994.  Faith was awarded a $350,000 equity grant in the first round in 1996 to build capacity, funded through the U. S. Treasury.  Matching partners were foundations, banks, credit unions and church associations.

Rita was part of the first graduating class of Inclusiv’s CDCU Institute at Southern New Hampshire University in October 2001.

Rita’s dedication and involvement in the credit union movement includes speaking in Washington, D.C. at the Black Caucus Forum, at the invitation of the late U. S. Congresswoman, Stephanie Tubbs Jones during her first term. She also testified in 2007 before the U. S. House Domestic Policy Subcommittee-Oversight and Government Reform Committee hearing on Foreclosure, Predatory Mortgage and Payday Lending in American Cities.  Chairman, Rep. Dennis J. Kucinich invited Rita to share how Faith’s Grace Loan Program could be an alternative to Payday Lenders.

Rita was appointed to serve on the Credit Union Council for the State of Ohio by Governor Ted Strickland from 2008 until 2010.  Rita retired as CEO of Faith Community United Credit Union in 2011 and is currently CEO Emeritus.

In  2012 Rita was inducted into the Bill Herring Group, a foundation to support credit union education and expansion.