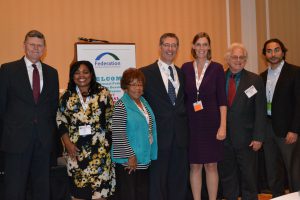 Inclusiv was pleased to present the 2017 Annie Vamper Helping Hands Award to Jim Masini, Board Treasurer of North Side Community Federal Credit Union, where he was a charter member and long-time Board Chair.

The Annie Vamper Helping Hands Award recognizes individuals who are making extraordinary contributions to the community development credit union movement. Annie’s lifelong dedication to credit unions serving low- and moderate-income people and communities remains an inspiration to CDCU staff and volunteers. The Helping Hands Award honors Annie’s memory and celebrates individuals who continue in our mission of service to the underserved. Click here to learn more about Annie Vamper.

Jim Masini was a progressive political organizer in Chicago’s Uptown neighborhood when, in the early 1970s, he was approached by a colleague and asked to consider signing on to a credit union in formation. He didn’t know what a credit union was, but he joined at the urging and assurances of his friend. When the charter was approved in 1974, he attended the first meeting of the Uptown People’s Federal Credit Union, deposited his initial shares and agreed to become a volunteer in the following year, when his political organizing term was due to end. In 1975, the CETA volunteer at the credit union remembered Jim’s promise and recruited him to join the Credit Committee. He attended his first Credit Committee meeting in June of that year and was immediately elected to the chairmanship. In 1977, he was elected to the Board to make Credit Committee reports directly. Soon after, the Board decided to change the name of the credit union to North Side Community to better represent the multiple neighborhoods that the credit union served.

Following an unsuccessful bid for public office in 1983, Jim was persuaded to serve as Chair of the Board of the credit union. It was supposed to be only a two-year commitment, but as Jim began to focus much more of his personal time and energy on credit union management and growth, the years began rolling along. In 2016, the time finally seemed ripe for new leadership. His long-time Vice President, Cliff Scott Rudnick, took a turn as Chair, and Jim moved over to the role of Treasurer. He has continued on in that position for another term in 2017.

Jim has been driven throughout his adult life by a commitment to Christianity and to social justice. He counts as his greatest achievement that his hours spent away from home in pursuit of those ideals have not lost him the love of his wife of 46 years, Linda. Together they have two wonderful children and three adored grandchildren.